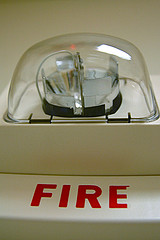 Home security systems are often considered as devices used to protect your home from intruders. But there are many other security systems vital for home protection from fire, or other environmental hazards such as carbon monoxide or radon.

One option you may wish to consider is an ionization fire detector. This type of system monitors changes in electric current that can occur due to particles ionized by combustion. It alters the air inside the detector to serve as a conductor of electrical currents. If smoke enters the detector and stops the current’s flow, the alarm will sound. Such a system works immediately and well in detecting smoke caused by a raging fire; it is slightly slower in detecting a low level, smoldering fire. Ionization fire detectors are usually powered by battery, and sound a low warning tone when batteries are running low.

Another type of fire detector is a photo electric device, which utilizes a small lamp that directs a thin beam of light through a detection chamber. Any smoke that enters the chamber will diffuse or scatter the beam of light, triggering a sensor that sets off the alarm. This type of system functions best with smoke from a smouldering fire, and reacts less rapidly to a flaming fire. Such a system can operate either by battery or through electric circuitry.

Yet another type of fire detector is a thermal device. Thermal systems are usually employed at a large commercial business or in a large scale housing structure. With a thermal system, an alarm sounds when the temperature in the property rises to a particular point. They can also be activated when there is a rapid rise in temperature before the high temperature point is reached. Because the heat of a fire usually needs to be very strong before the alarm will sound, thermal detectors are not usually a first choice for fire protection.

Carbon monoxide detectors are also an important resource for home security. These devices detect the colorless, unscented but deadly carbon monoxide gas that poses a potentially deadly health risk to people. They measure the amount of carbon monoxide in the environment in a given period; if the amount rises, an alarm is triggered before residents can experience any symptoms. These detectors operate on both batteries and electrical current; some even provide a constant digital reading of CO levels. Detectors that utilize electrical current usually contain a solid-state sensor that cleans itself and samples the air periodically. Battery operated detectors usually employ a passive sensor, and feature a back-up system so that the detector will still operate even if power fails. Both types of CO detectors can be purchased with smoke detectors available in the same system.

Radon detection is another important security resource. Dedicated to the detection of odorless, uncolored radioactive radon, these systems alert you if radioactive gas from an external source seeps in to your home. Most systems employ a small sheet of plastic that collects alpha particles which reveal radon; users of these devices mail the plastic sheet to a lab to uncover radon concentration. Some devices use charcoal granules to trap radon and are sent in a container for lab analysis. An alarm is triggered when long term radon levels exceed a set acceptable level.

Consider supplementing your home security system with environmental protection devices such as these for the maximum in home safety.